“Sharp” Alias ​​”Aaron Goodstone”, born in 1966 in New York, is a graffiti artist, using lettering from different alphabets. Of Caribbean origin, he received a Jewish education which influenced his painting.

In the Jewish tradition, there is no figurative representation and each letter of the Hebrew alphabet carries meaning. He explains that his penchant for abstraction comes from there. He is also influenced by ancient calligraphy, ancient alphabets, Egyptian, Gothic, Hebrew, Greek and Latin.

It was in his teens that he took up graffiti. With “Delta 2”, he created the Ka crew, the “Kings Arrive”, in the early 80s. They painted lettering of such power that their styles have been found even on European walls. They were most active on lines 4 & 6 of the New York subway. Sharp began writing to protect himself and be able to ignore the violent and frustrating social environment in which he grew up. He considers writing as his “radical refuge” which allows him to gain a foothold on his emotions in order to create positive things, and to transmit messages in relation to the social injustices he has experienced, or in homage to his friends who have lived through them. ‘he saw him get lost.

He is the inventor of an innovative abstract style: “Abstract Techno Symbolism”, which consists of the evolution of the modern alphabet to convey messages through abstract images and symbols.

Henry Chalfant took some great photos of his street and rail works.

In the 1990s, he lives in France and is in the pop-up hospital with artists such as “Jonone and AOne”. He also exhibits in certain Parisian galleries. 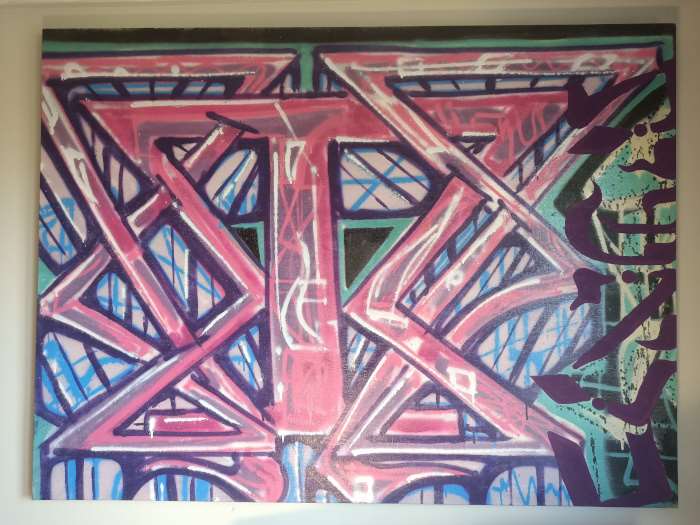 Titled on the back