Plastic artist
The doll in all its states takes shape under the fingers of Paloma Vuong. Whatever the representation, the symbol, the emotion they express, she designs them from meticulously chosen materials. Her dolls are

unique pieces in which she incorporates an agate, a semi-precious stone that wanders through their body. A bit like a cat that instinctively lands on the part of the human body that needs comfort. The dolls are called “Totems” because it is up to each person to give them the value they want according to what makes them feel good. These dolls are like cuddly toys. They are there to comfort. Unique and evolving like each of us.
Art takes care of us…
Paloma Vuong’s Totem dolls are inspired by the book Women Running with Wolves by Clarissa Pinkola Estés and the painting “Thoughts” by the painter Hundertwasser among others. Above all, they open up a new dimension in her artistic and professional career: an eclectic mix of techniques acquired in the service of her creativity.

Course
Thanks to an overflowing imagination, Paloma Vuong has tried out different techniques throughout her life, in order to realise all that was growing in her head.

At the age of 17, she obtained a Baccalaureate in Plastic Arts and took courses in fashion design at the ready-to-wear company ZAPA (1981). Then, she obtained a BTS in historical costumes specialising in “tournures” in 1991, and ran her own costume and corsetry workshop in Pézenas as a craftsman in 1996. She learns about dyeing and transforming materials. Following a competition of the Métiers d’Arts of the city of Paris, she obtained the SEMA prize in 2000 for her atypical professional career in the arts. That same year, she discovered haute couture weaving while working at Malhia Kent, the official supplier of Chanel tweeds, among others, and the magic of fibres when she was in charge of the decoration of the Trend Forum of the Spinexpo international “fibres and yarns” exhibition in Shanghai in 2004.
In parallel to her professional career, she exhibits her personal creations as a craftswoman in various fairs and participates in artists’ collectives. To date, she runs two workshops in Pont-Aven (South Finistère) dedicated to freeing the personality of each person. A spontaneous painting workshop and a “Tao doll” workshop which can be declined endlessly. Without judgement, comparison or expectation of a precise result, it is easier to free one’s innate creativity, to assert oneself and to blossom whatever the context. 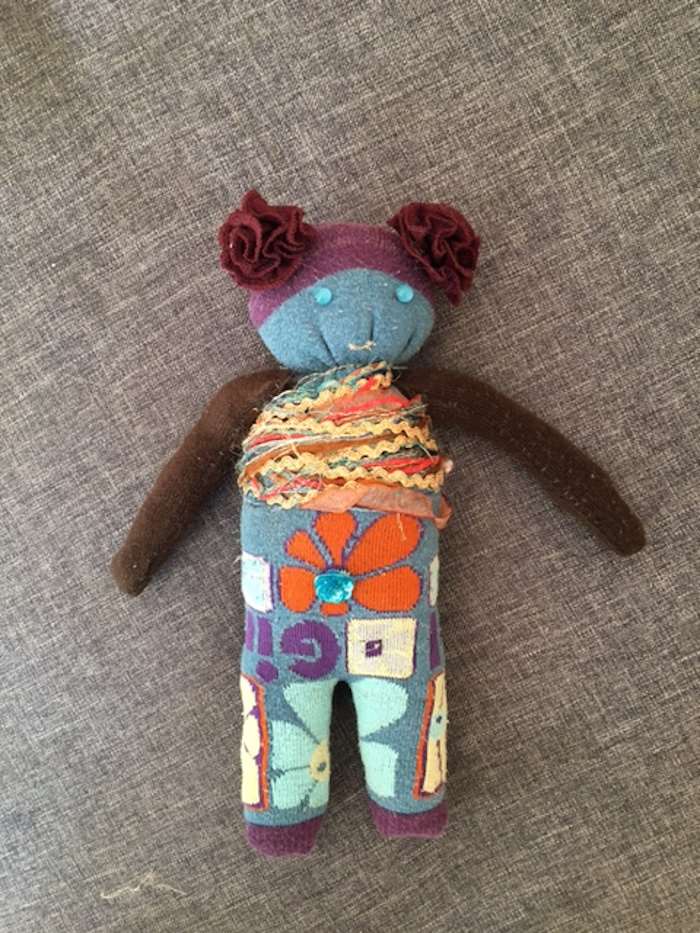 Particularities : Flowers on the head : bucolic antennas.
Blue agate for the eyes. Enlarged vision.
The torso is covered with threads and fibres symbolising the creative potential.
The Agatha in the torso symbolises the power of healing. 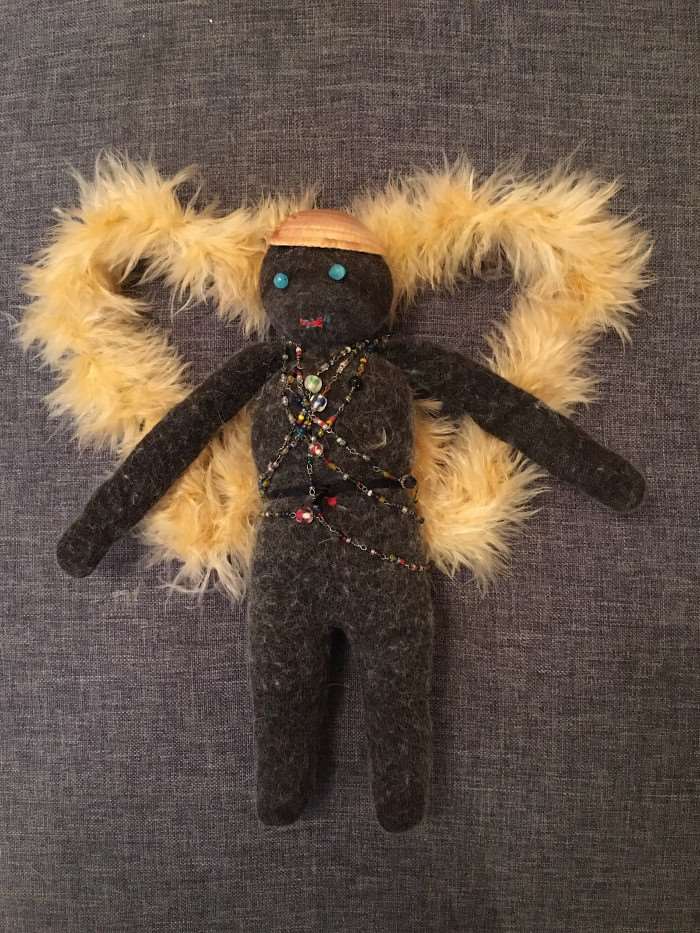 Support : Multiple recycled materials.
Shell helmet. Goose down wings. Mobile semi-precious stone agate, placed in the torso.
Blue agate for the eyes.
Multicoloured ethnic necklace that symbolises all the emotions that run through us.
Anti-bacterial padding.

Special features: Shell helmet symbolises the energy of the cleansing water. The salt water of the ocean.
Its blue agate eyes, fluidity, expanded vision, wing-like feathers, softness. The nest. The pink Agatha in the torso symbolises the power of healing. 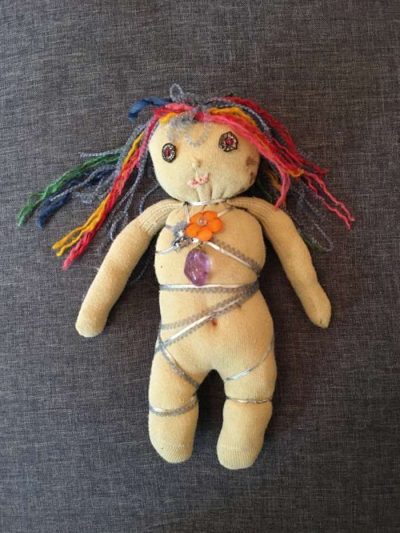 Support: Multiple recycled materials.
Assemblies of threads and fibres for the hair.
Agatha, a mobile semi-precious stone, placed in the torso.
Ceramic buttons for the eyes.
Anti-bacterial padding.

Special features: The spots on her face represent her wounds.
His ceramic eyes symbolise the look beyond appearances. Water, earth, fire, air.
Her multicoloured hair represents strength, imagination, the rainbow.
The Agatha in the torso symbolizes the power of healing.