From his real name Fernando Carlo, he was born in 1968 in the South Bronx Kingsbridge Chapter. He has been claiming for over thirty years his integrity as a street artist. In 1978 influenced by his cousin Chris, he began to paint. In 1982, he created his own crew, the “Kids Destroyer” which later became “King’s Destroyer”. In the 80s / 90s, he painted in the New York subway which will make his fame. In the 90s, he decides to go on a crusade against the clean city operation of the mayor of New York. Its incessant bombardments have defeated the populist ambitions of the local politics overcoats. His peers agree to recognize him. Without Cope2, the graffiti would probably no longer be used today in Manhattan and its suburbs. In recent years, he has been asked by Time Magazine, Converse, Adidas, among others. We even find his work in the virtual realm with appearances in video games like Mark Eckos: Getting up and Rockstar Games: Grand Theft Auto IV. 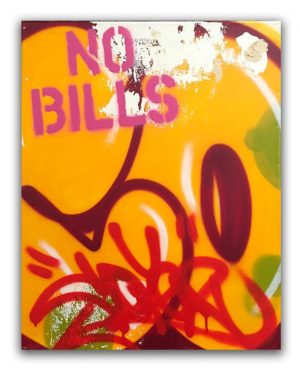 Against Signed and dated on the back