Born in 1935 in Naples (Italy). He lives the first five years of his life in Naples. After the declaration of the second world war, in 1939, Ben and his mother multiply the trips in: Switzerland, Turkey, Egypt, Italy …, to finally settle in Nice in 1949. His mother finds him a work of boy at the bookstore “Le Nain bleu”, then buy him a bookstore-stationery. At the end of the 1950s, he sold it to open a stall in Tondutti-de-l’Escarène street, whose facade he transformed by accumulating a lot of objects and in which he sold second-hand discs. Quickly, his shop becomes a place of meetings and exhibitions where meet the main members of what will become the School of Nice: César, Arman, Martial Raysse and many others. Close to Yves Klein and seduced by the New Realism, he is convinced that “art must be new and bring a shock”. In 1955, fascinated by banana, he made a series of drawings that marked the beginning of his graphic research. In 1959, he began his “living sculptures”: he signed people on the street, his friends, and even his family. Ben will sign everything he finds: “holes, mystery boxes, kicks, God, chickens, etc.” Connecting art and life, explaining that everything is art and that everything is possible in art. He joined the Fluxus movement in October 1962, following a meeting with George Maciunas in London. Between 1960 and 1963, he developed the notion of appropriation, everything is art and everything possible in art. Then begins his series of “Heaps”, piling up land and garbage on land, and signing them. In 1965, in his shop, he created a gallery three meters by three meters in his mezzanine: “Ben doubts everything. He exhibited Biga, Alocco, Venet, Maccaferri, Serge III, Sarkis, Filliou … In the early 1980s, returning from a year spent in Berlin on a scholarship, he met young artists (Robert Combas, Hervé Di Rosa, Francois Boisrond, Rémi Blanchard, etc.), a group to which he gives the name of Figuration Libre. Very involved in the contemporary scene, he has always supported young artists and gives his point of view on all the news, be it cultural, political, anthropological or artistic, in his regular and prolix newsletters. He lives and works since 1975 on the heights of Saint-Pancrace, hill Nice. Ben’s works are featured in the world’s largest private and public collections, including New York’s MoMA, Minneapolis’ Walker Art Center, Sydney’s Art Gallery of New South Wales, Vienna’s Museum Moderner Kunst Stiftung Ludwig , the MUHKA of Antwerp, the Stedelijk Museum in Amsterdam, the Solothurn Museum, the National Museum of Modern Art in Paris, the Museum of Modern and Contemporary Art in Nice, the MAC from Marseille, the M.A.C. from Lyon.

The limits of ART 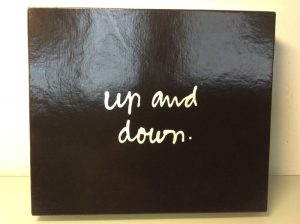 Technique: Silkscreen on wood and cardboard

Technique: Original silkscreen in one color on black wove paper